Next European Fighter Engine at a... Power-to-liquid and sun-to-liquid fuels may be the aviation industry’s key to meeting its ambitious climate targets – if they can be produced in the quantities required, and quickly. 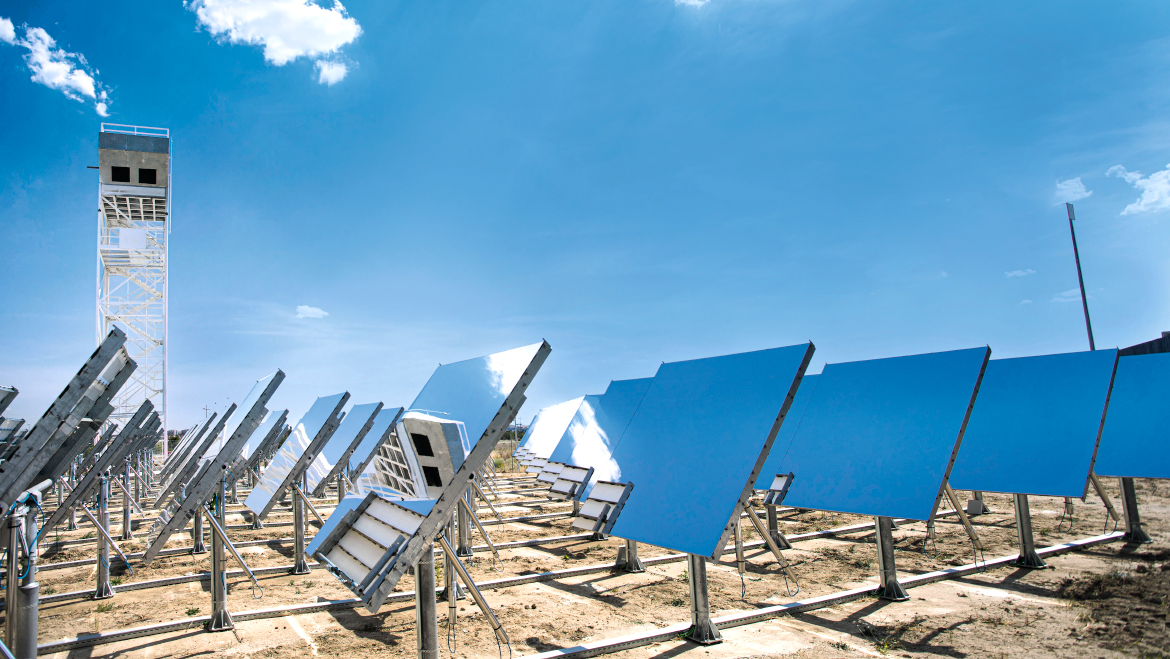 If we compare aircraft fuel consumption levels and the associ­ated CO2 emissions from the 1960s and today, they have almost halved as a result of more efficient aircraft engines, improved aerodynamics and new, lighter materials. And as it strives to re­duce fuel burn further still, the industry will continue to work on these measures.

Fuels from renewable electric power and sunlight
“In light of this situation, synfuels hold great promise for achieving aviation’s climate goals,” says Dr. Andreas Sizmann, Head of Future Technologies and Ecology of Aviation at the Bauhaus Luftfahrt research institution in Munich. He’s referring to two specific variants of sustainable aviation fuel (SAF), known as power-to-liquid (PtL) and sun-to-liquid (StL) fuels. The ­aviation industry has long since recognized the potential of no longer producing aviation fuel from crude oil and has been testing alternative fuels for over ten years now. For a long time, biofuels were regarded as the favorite option, but now it’s becoming increasingly clear that their viability as a sustainable fuel source for the global fleet is limited because cultivating the energy crops required would take up way too much land. A huge advantage of SAFs is that they are “drop-in” fuels, which means they can be used without any technical modifications to the aircraft, engine or airport infrastructure.

To produce them, water and CO2 are first converted into hydrogen and carbon monoxide using renewable electric power (PtL) or concentrated sunlight (StL) to form what is known as a syngas. In the PtL process, the water is split into hydrogen and oxygen using electrolysis, and the carbon dioxide is reduced to carbon monoxide by means of a reverse water-gas shift reaction. “With StL, the syngas is produced by a thermochemical redox reaction,” says Sizmann, who coordinates the EU-funded SUN-to-LIQUID project. “In simple terms, this process involves using concentrated sunlight to heat a metal oxide and extract part of the oxygen. When the temperature is reduced, the oxide takes the oxygen from the water and the carbon dioxide to form hydrogen and carbon monoxide,” he explains.

A greener way to refuel: Synthetic fuels must become viable for aviation as soon as possible if the industry is to meet the targets it has set itself to reduce CO2 emissions.

Power-to-liquid process is ready to scale up
Both in the power-to-liquid and in the sun-to-liquid process, the next step is to apply the established method of Fischer-Tropsch synthesis to produce long-chain hydrocarbons from the syngas. These hydrocarbons are then refined into kerosene, which can be used to refuel aircraft as normal. “When PtL and StL fuels burn, they emit CO2 in the same way as fossil fuel kerosene. For that reason, they are sustainable only if the CO2 used to produce them comes from the atmosphere,” says Sizmann’s colleague Dr. Valentin Batteiger, who heads the alternative fuels research focus area at Bauhaus Luftfahrt. To obtain this atmospheric CO2, a tech­nology known as direct air capture is applied. Swiss start-up Climeworks, for example, uses large filters to chemically bind the CO2. However, direct air capture technology still has plenty of room for improvement in terms of efficiency and most crucially cost.

The power-to-liquid process is a ­pioneering approach that uses ­renewable energy to produce hydrogen, synthesizes it with carbon dioxide to form hydrocarbons and processes these into a liquid fuel. To the video

MTU Aero Engines is rising to this challenge and helping bring these fuels to market, also in partnership with other industry representatives. “The technology behind the PtL process has been mastered and is ready to be scaled up – something we believe needs to happen now,” says MTU expert Fabian Donus from Innovation Management. After all, larger plants are still extremely few and far between around the world, which is why PtL fuel is so much more expensive than standard kerosene. In light of this, Sizmann is also strongly in favor of scaling up the technology for the StL method – and quickly. “We still need to do some more research into making the process more efficient, but we can do that as we work to establish a plant that operates in the megawatt range.”

Aviation could become largely carbon neutral
All of today’s approved production routes for SAFs involve an admixture of at least 50 percent fossil fuel kerosene. “But research is already underway into production routes that don’t require this admixture. A wide-scale rollout of SAFs would immediately improve the aviation industry’s carbon footprint – and appreciably so,” Donus explains. MTU is keeping a close eye on the development of StL technology, he says: “At the moment, though, PtL seems to be a step ahead.” However, he believes that development of a PtL industry isn’t viable without subsidies. Sizmann and Batteiger agree. “How quickly we can roll these technologies out hinges on political will and how the costs of using crude oil develop. A sun-to-liquid plant covering some 38 square kilometers could produce around 300,000 liters of synthetic kerosene a day – that’s almost enough to refuel one Airbus A380. It would take about the same area of solar panels to generate the power for a PtL plant with the same output,” Batteiger explains. While a wind power solution would take up less space, people are less accepting of wind turbines.

But given that the transport costs for liquid fuels are comparatively low, very sunny or windy areas would be most suitable for large-scale production of synfuels. According to Batteiger, an area covering about one percent of the world’s deserts would be adequate to produce synfuels in volumes sufficient to meet the aviation industry’s demand worldwide. This equates to around 300,000 square kilometers – almost the size of Germany. “Biofuel production would call for an area at least ten times as large, plus the land would have to be arable,” says Batteiger. “So, despite all the challenges they bring, PtL and StL are still our best bets for making aviation carbon neutral.”

Joining forces to drive synthetic fuels
MTU Aero Engines participates in research into SAFs through its memberships in the Bauhaus Luftfahrt research institution in Munich and the Berlin-based Aviation Initiative for Renewable Energy in Germany e.V. (aireg) where it heads the working group on fuel utilization. As a non-profit initiative, aireg works to find solutions for aviation to meet the ambitious CO2 reduction targets by promoting the availability and use of renewables in the industry. To this end, aireg joins forces with various scientific institutes in Germany, including the Karlsruhe Institute of Technology (KIT), the Jülich Research Center, the German Aerospace Center (DLR) and the Hamburg University of Technology. These research institutions are all aireg members alongside a host of other companies and organizations, including Bauhaus Luftfahrt.

In a nutshell: Sustainable aviation fuels