A powerful engine for a powerful...

Developing and optimizing fuel cells and hydrogen tanks is a challenge. But identifying the best way to integrate those components into the aircraft is just as tough. 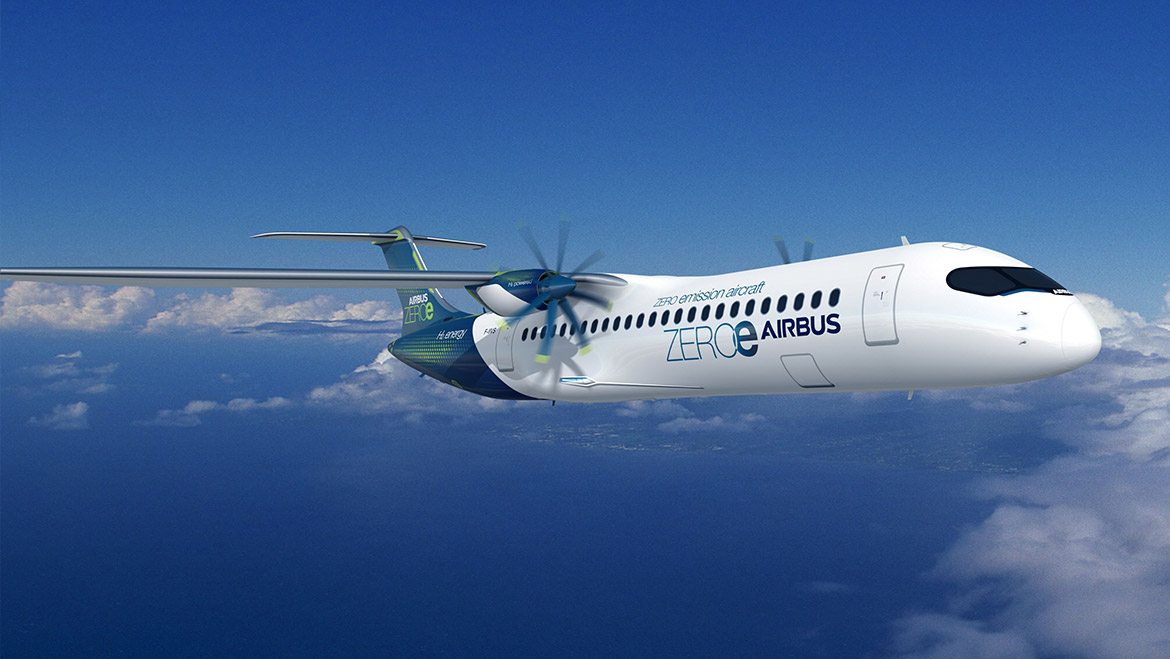 MTU Chief Engineer Flying Fuel Cell Barnaby Law is confident that passenger aircraft will be hydrogen-powered in the future—and he is not alone. Just seven short weeks after MTU and the German Aerospace Center (DLR) signed a memorandum of understanding to join forces in developing a fuel-cell powertrain in early in early August 2020, Airbus published its definitive plans for making aviation more environmentally friendly. Airbus envisions a hydrogen-powered turbofan concept for medium- and long-haul flights. Modified engines would burn the volatile gas directly. Airbus thinks this aircraft could enter service in 2035. One aspect of this design isn’t obvious at first glance: the H2 aircraft has no windows at the rear pressure bulkhead. This is where the hydrogen tank is located. “There has to be a compromise somewhere if you want aircraft to be powered by hydrogen,” Law says.

This is because, even at minus 253 degrees Celsius, supercooled liquid hydrogen has a volume four times that of conventional kerosene for the same energy content. “That means there simply isn’t enough space to store hydrogen in the wings, where the kerosene tanks are currently integrated,” fuel-cell expert Law explains. This restriction also applies to hydrogen-based propulsion systems that rely on fuel cells. Moreover, apart from the larger footprint, a liquid hydrogen tank must be spherical or cylindrical in shape to withstand the higher pressures compared to kerosene tanks. “If you don’t want to mount the tank on the outside of the aircraft—not advisable, as it would have a major impact on the aerodynamics—the fuselage is your only option,” Law says. This is also where he sees the H2 tank being positioned. To be able to transport a similar number of passengers, hydrogen-powered aircraft will therefore need to be either greater in length or wider in fuselage diameter.

Bauhaus Luftfahrt: Due to the enlarged fuselage surface of a hydrogen aircraft, there is synergetic savings potential when using a propulsive fuselage.

Law presents other possible scenarios, such as distributing the fuel among several small tanks or combining a larger, comparatively low-pressure H2 storage tank with a smaller high-pressure tank. The latter solution is worth considering for hydrogen direct combustion, since the engines require hydrogen pressures of 60 bar for this. “As a rule, however, several small hydrogen tanks will always be heavier than one or a few large tanks.” For this reason, he expects the second option to become the future standard. However, when it comes to long-haul and ultra-long-haul flights, he points out that just a single tank—even one made as usual of lightweight aluminum—would be so large and heavy that liquid hydrogen is no longer economically viable. “To put it bluntly, the tank would take up all the space, with none left for passengers,” Law says. That’s why MTU believes that long-haul aircraft will be powered by drop-in sustainable aviation fuels (SAFs).

Apart from the challenge of integrating the liquid hydrogen tanks, designing aircraft with fuel cells as the primary propulsion system begs the question as to the best location for the cells. “There are two alternatives,” says Jochen Kaiser, Head of Visionary Aircraft Concepts at the Munich aviation research institution, Bauhaus Luftfahrt. “The fuel cells can be placed either in the fuselage, as close as possible to the hydrogen, or in the nacelle, as close as possible to the electric motor,” he says. Locating them in the fuselage offers the advantage of short hydrogen pipelines to the fuel cells. The downside: longer cables have to be laid to the electric motors. These advantages and disadvantages are reversed in the nacelle, with shorter electric cables and longer H2 pipelines. In Kaiser’s view, the latest research indicates that placing them near the electric motors offers additional benefits. first, it is easier to dissipate the waste heat from the fuel-cell stacks if they are in the nacelle; second, conventional cable technology would be sufficient. 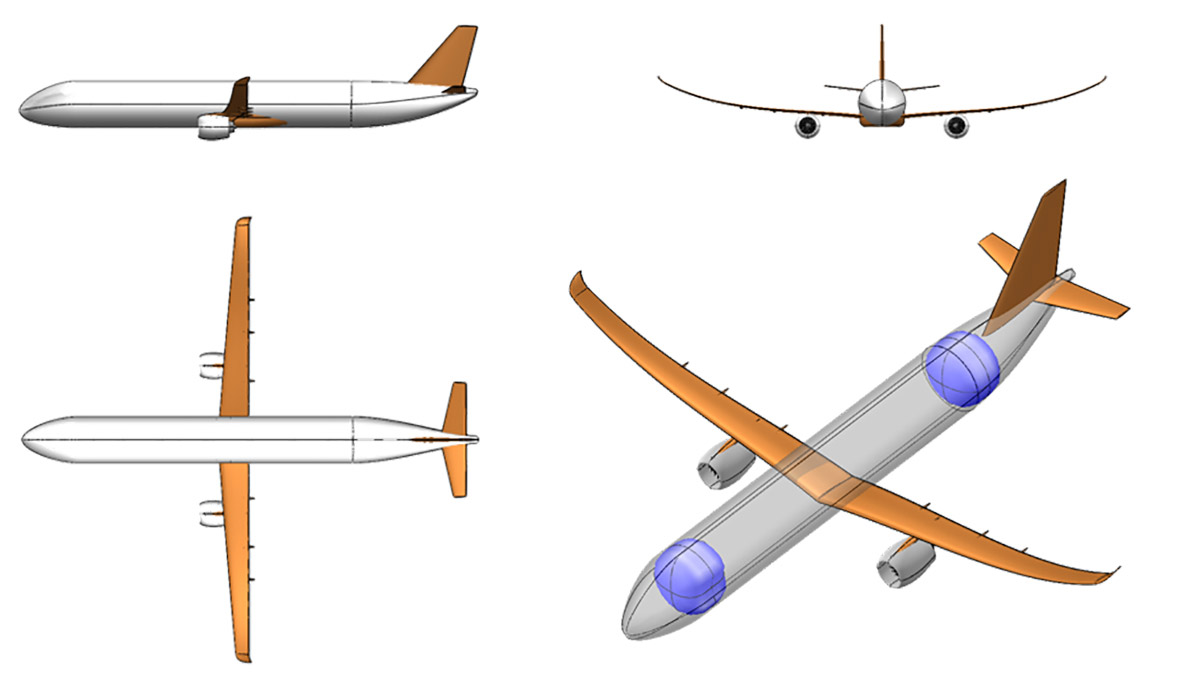 One possible concept: As liquid hydrogen tanks benefit from a high volume-to-surface ratio, the Hyliner (2.0) aircraft features fuselage tanks in the nose and aft section of the aircraft.

Hydrogen is the future

Hydrogen has the potential to minimize the emissions generated by aviation and even enable enable virtually emissions-free flight for most aircraft in the future. In light of the above, MTU essentially sees three ways of using the volatile gas:

Drop-in alternative sustainable aviation fuels based on hydrogen (SAFs for short), which are produced using the power-to-liquid or sun-to-liquid process, for example, can be used to power existing aircraft and engines today.

Burning liquid hydrogen directly in the gas turbines is another alternative that could be implemented quickly. This would require modifications to the engine, particularly the combustor. MTU believes that this could be feasible in a few years.

In the long term, MTU aims to capitalize on the third potential application of hydrogen: converting it into electrical energy via a fuel cell. This technology promises virtually emissions-free flight.

“The situation is different when the fuel cells are in the fuselage,” says the Bauhaus Luftfahrt scientist. Because the voltage has to be kept lower in the aircraft for safety reasons, it takes considerably thicker and heavier cables to conduct the same electrical current. “One possible solution to this problem would be high-temperature superconducting cables—they are much lighter and can conduct a great deal more electricity,” Kaiser says. However, this technology is still in its infancy. Which is why, in Law’s opinion, integrating the fuel cells into the nacelle is the only way to go. “Our philosophy at MTU says no experiments, except in research and development. When implementing technologies, we favor tried-and-true technologies that are part of our expertise. After all, aviation has the most stringent safety requirements.”

However, he adds, MTU is extremely confident that hydrogen propulsion will be a reality within the next 15 to 20 years. “This presupposes that the majority of airports around the world have implemented the necessary hydrogen infrastructure by then,” Law says. “It can be done,” says the MTU expert. But how is another matter entirely.