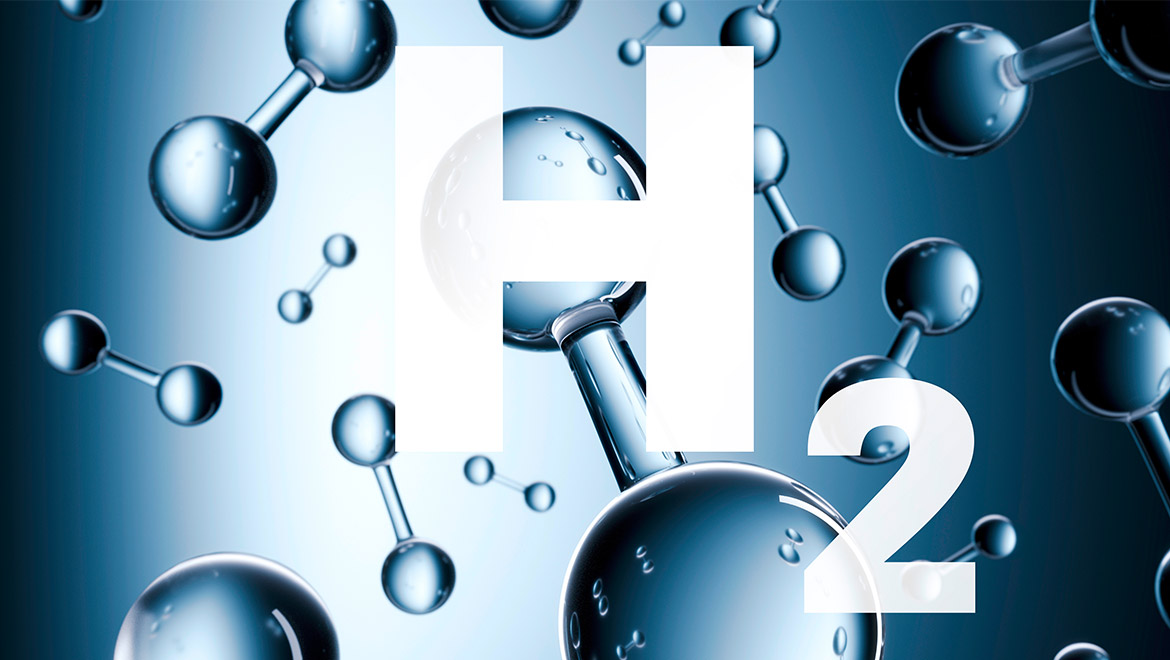 Too good to throw away: Decommissioned aircraft contain spare parts, valuable materials and even elements for making stylish upcycled furniture.

Text:
Monika Weiner has been working as a science journalist since 1985. A geology graduate, she is especially interested in new developments in research and technology, and in their impact on society. 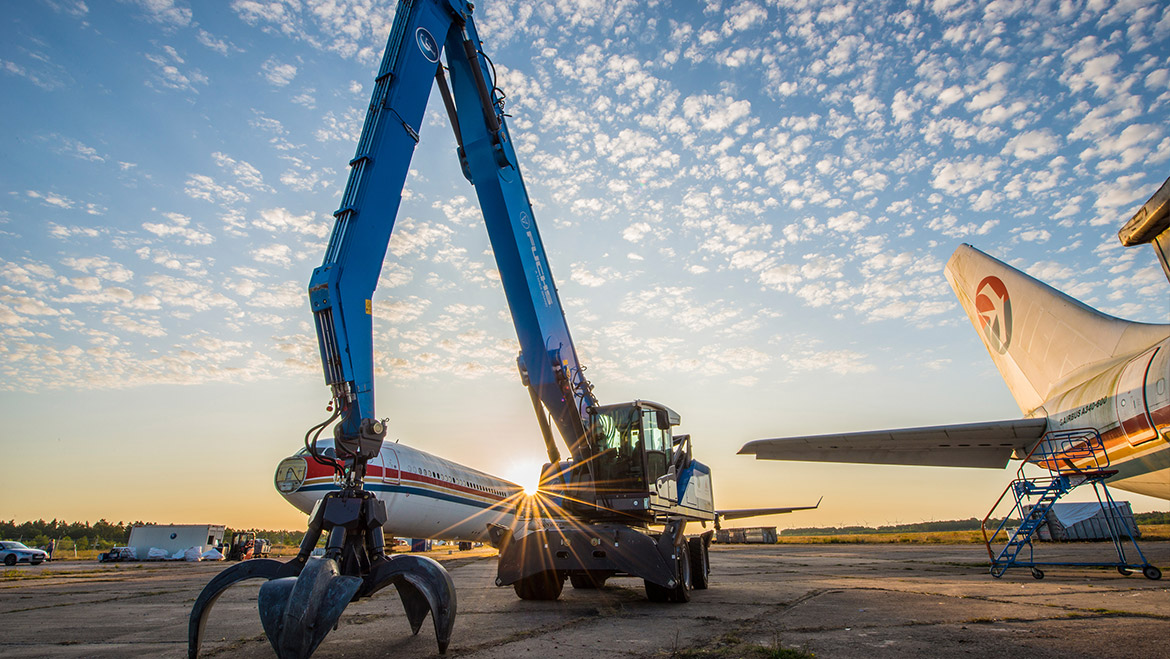 For decades, no one paid much attention to the defunct commercial aircraft parked on the edges of remote airfields. Only gradually did it become clear what treasures lay dormant in these “aircraft graveyards”: engines, turbine components, avionics and landing gear can serve as spare parts, and fuselage elements contain valuable metals such as aluminum, titanium and copper that can be reused. Even seats, wall fixtures and wing sections can be upcycled to produce exclusive furniture.

Recycling: Recycling a certain material or product means using it again after it has served its original purpose. If a recycled item is of lower quality than the original product, its reuse is called downcycling.

Upcycling: Upcycling is when products that have reached the end of their useful life and are technically considered as waste are simply turned into new products. Another name for upcycling is creative reuse. This is where unwanted or waste products are used as materials that are reworked and upgraded to create new products.

In Europe, the business of aircraft recycling is still in its infancy, but it is gaining ground fast. The biggest player is French company TARMAC Aerosave, in which Airbus has an interest. In Germany, the market is shared by a number of small and medium-sized enterprises specializing in aircraft demolition and recycling. The aim is to reuse as many materials as possible.

Taking apart an entire aircraft, sorting all the components by type and reprocessing them is an art in itself. For instance, engines and landing gear that are to be harvested for spare parts must be professionally dismantled. Next, all pollutants must be removed, such as extinguishing agents, kerosene and oils from hydraulic lines.

“Once all the prep work is done, dismantling the aircraft takes two to six days depending on its size,” says Marc E. Keske, CEO of MoreAero GmbH. The company specializes in disposing of aircraft at the location they last touched down. “On-site demolition benefits the owner in that they don’t have to transport the aircraft, which saves them money,” Keske explains. His teams are set up to work anywhere. Everything they need is brought to the site by rail or sea in a standard container, including pumps to drain the kerosene tanks and brake lines, tools to remove compressed air cartridges or oxygen tanks that are still pressurized, and scrap shears that can be mounted on excavators. All that is left once the “demolition” is complete is a pile of torn-up parts.

Recycling companies are brought in to deal with this scrap, shredding the parts and separating the various materials. “In this way, it’s possible to reclaim a variety of metals as well as complex alloys, which industrial companies can then use in the manufacture of new products,” explains Gregor Zenkner, Manager Business Development at CRONIMET, a company specializing in metal recycling. From aircraft scrap, it’s possible to harvest the likes of temperature-resistant superalloys containing titanium and nickel, which can be reused by the aerospace sector. Any material that cannot be repurposed is incinerated. 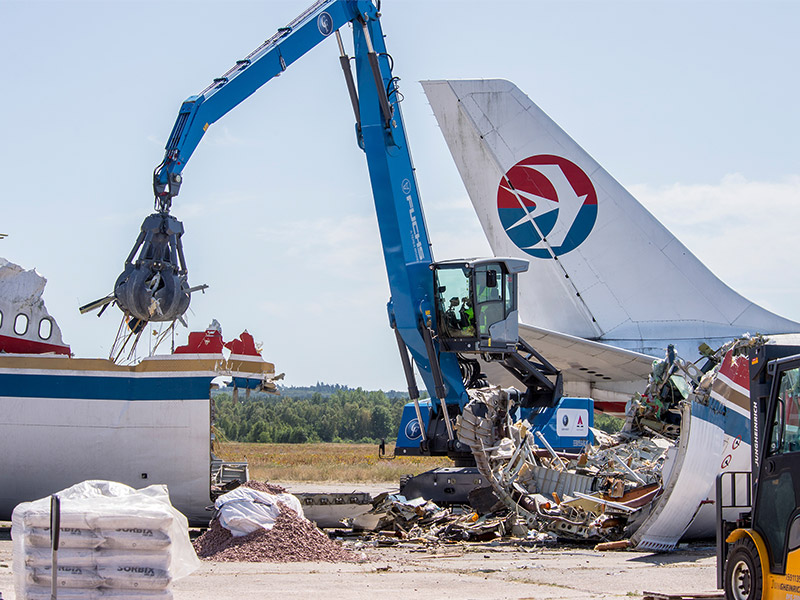 Heavy machinery and equipment is required to dismantle an aircraft. 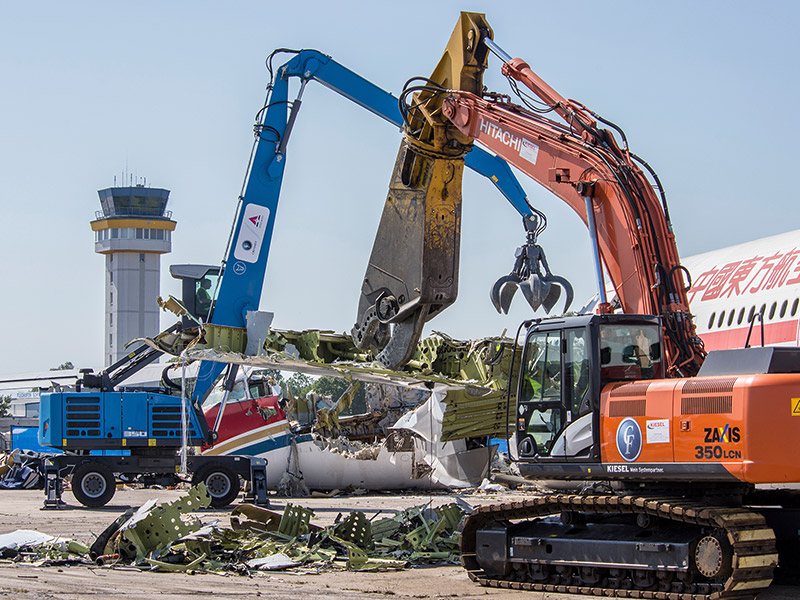 Removal of potential replacement parts like engines and landing gear must be done by experts. Harmful substances must also be removed. 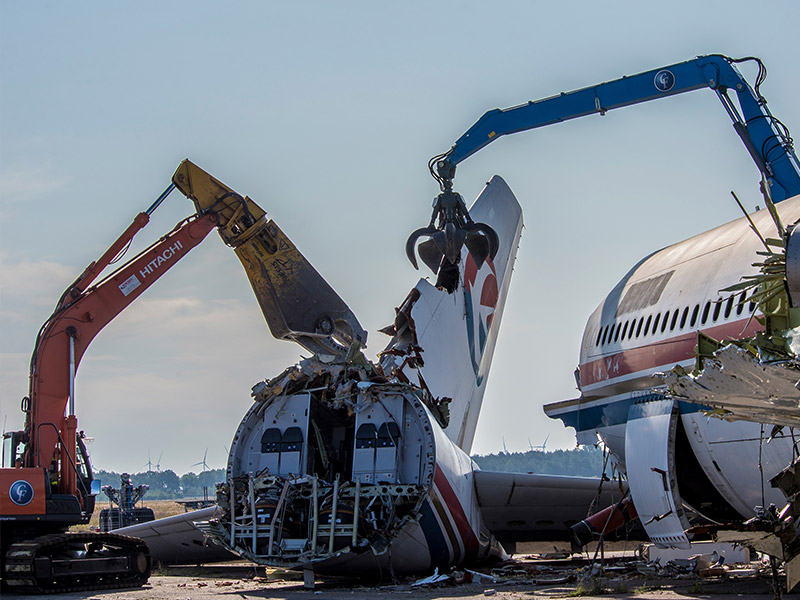 Tearing down an aircraft into individual parts might look brutal, but it benefits the environment. 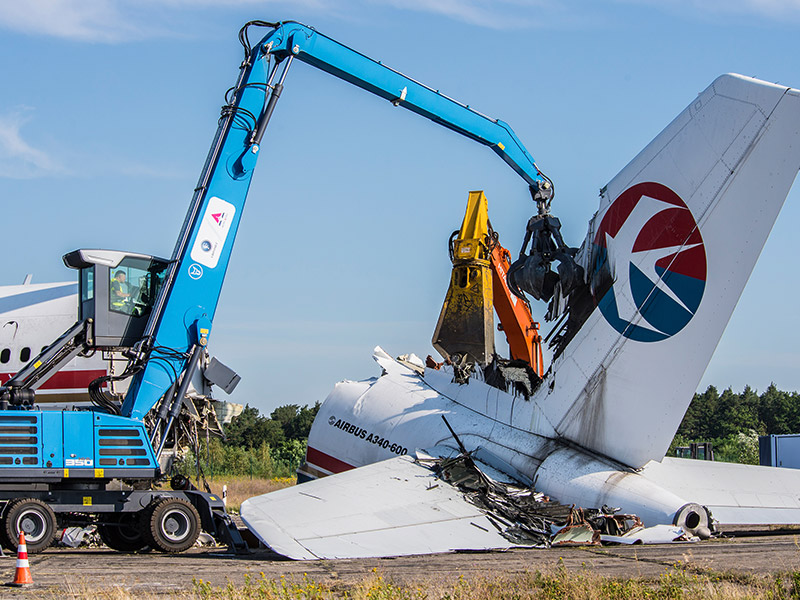 A mobile recycling unit transports anything that is needed to its future place of use in containers. 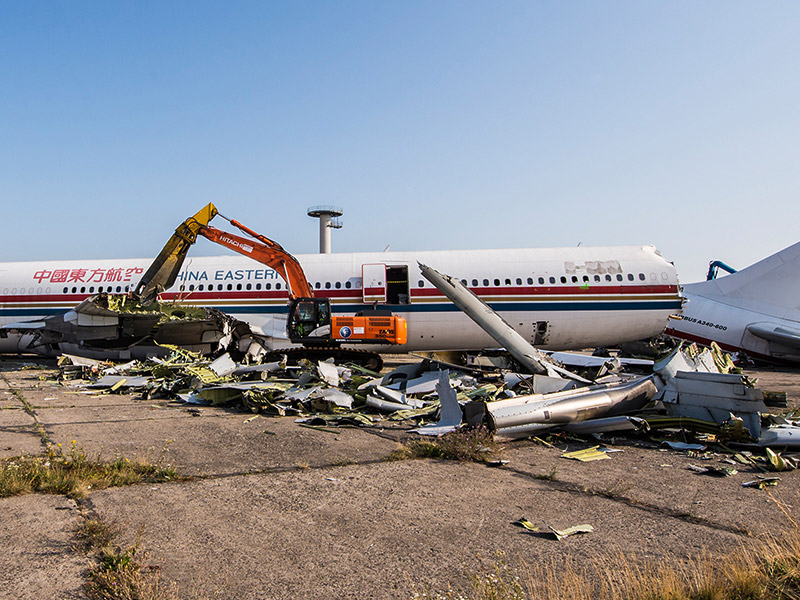 Following the prep work, it takes between two and six days to disassemble an aircraft, depending on its size. 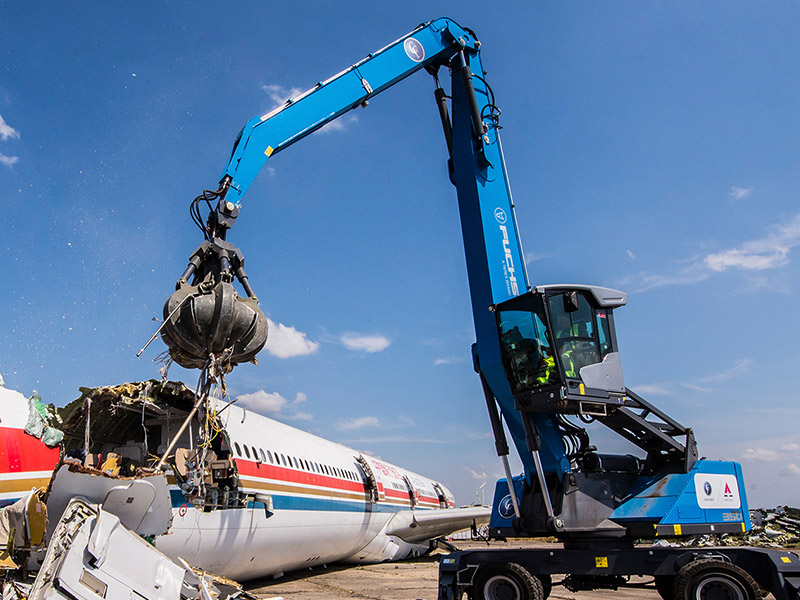 Following tear down, all that remains of the aircraft is a pile of individual parts.

Each change to the way aircraft are constructed creates new challenges for recyclers. In the past, the fuselages of aircraft earmarked for disposal have been made of aluminum, which is easily recyclable. But now, aircraft manufacturers are increasingly using lightweight fiber-reinforced composites—in particular carbon fiber reinforced polymers (CFRPs). Sooner or later, these CFRPs will also have to be demolished and processed on a large scale.

Plastic recycling: Backrests made of commercially available hybrid yarns with recycled carbon fibers are produced using LFT injection molding at the Fraunhofer Institute for Chemical Technology. reCa-HiT is funded by the Baden-Württemberg Ministry of Economics, Labor and Housing.

Torsten Müller from the Fraunhofer Institute for Chemical Technology ICT is researching the technical and economic aspects of how this can be done. “Even carbon fiber reinforced polymers can generally be recycled. But so far, this has been more complicated and expensive than disposal through incineration or, provided the country in question allows it, landfills,” Müller says. One polymer typically used in aircraft construction is epoxy resin, in which the fibers are embedded. Reclaiming the fibers means separating the epoxy resin from the fibers in the absence of oxygen as part of a process called pyrolysis, which requires special equipment.

Less of a technical challenge is the recycling of expensive carbon fiber reinforced thermoplastics. As Müller explains, these can be shredded before being heated and molded into new shapes: “Because shredding shortens the fibers, the recyclate doesn’t have the same properties as the primary material. But it can be used to produce things like cable ducts, which could then be used in a new aircraft.” But Müller says that the closed-loop economy of polymer recycling is fast approaching its limits because the materials are rarely available in separated form.

Alongside traditional recycling, a new market is emerging—one that allows old parts to shine in new splendor: upcycling. In this case, creativity knows no limits. Whole aircraft are transforming into apartments or hotels, small “aeropods” made from fuselage sections are being used as conservatories or gazebos, and various companies are offering trolley furniture as well as bags and accessories made from seat covers and life jackets.

Marius Krämer, one of the founders and CEOs of Wilco Design, and his team manufacture exclusive furniture out of old aircraft parts. He procures the raw materials from airlines and waste disposal contractors. “Upcycling is all the rage at the moment. People are increasingly seeing the value in repurposing things rather than throwing them away,” Krämer says. His furniture range includes wall bars made from fuselage parts, restored trolleys and seats, and tables made from wing sections. There is even a whirlpool that in its previous incarnation was an Airbus engine inlet.

The airlines have also recognized and marketed this trend. Lufthansa, for example, offers its Miles and More customers its own upcycling collection, featuring a variety of products ranging from the Messenger Backpack to the Flying Coffee Table—each featuring details of where the decommissioned parts came from. In short, aircraft recycling is becoming a lifestyle.